Secure European Communications have become a hot topic and the possibilities how to achieve secure communications within Europe but also outside of Europe are currently investigated and researched. The conference tried to put some additional focus on technical and political aspects and presented one of the current “flagship” projects dealing with safe and secure European routing. 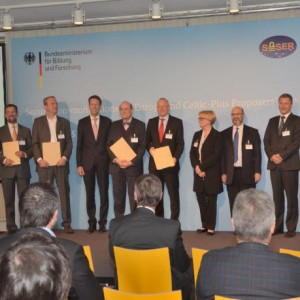 Major European communications technology companies signed a memorandum of understanding for the development of secure network technologies at the “Secure Communications for Europe” conference in Berlin on 24 June 2014.

ADVA Optical Networking, Alcatel-Lucent, Nokia Siemens Networks, Orange and Deutsche Telekom Laboratories agreed to coordinate their joint R&D efforts over five years for a secure, robust, and reliable network. This joint work will be done within and beyond the SASER project for “Safe and Secure European Routing”. SASER is a ﬂagship project under Celtic- Plus which was launched in August 2012 and will run until the end of September 2015.

Secure network communications have become a crucial topic for ICT research and development within and beyond Europe. The memorandum of understanding (MoU) marks an important milestone for developing the technologies for enabling safe and secure networks in Europe. The central technological and political relevance of the MoU was underlined by the fact that representatives of the German government and other governments participated in the event. 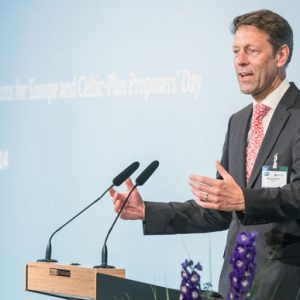 Dr. Georg Schütte, state secretary of the German Federal Ministry for Education and Research (BMBF), stressed the importance of secure communications in Europe: “We can only use the possibilities of modern communication technologies in full, if we can control the related risks. To achieve this we need joint efforts in Europe. SASER is a sparkling example of how we can improve digital sovereignty through joint efforts.”

The conference presented interim results of the SASER project, including improved transmission algorithms in fibre-optical networks and methods for increased network security. In this context, SASER has been working on innovative optical crypto algorithms and new methodologies for key exchange as a basis for improved data security. A major goal of the SASER project is to replace unsecure and energy-hungry routers with new integrated optoelectronic nodes.

SASER (Safe and Secure European Routing) is an 80 million euro public-private partnership project comprising 61 companies, research organisations, and universities from Germany, France, Finland, Denmark, and the UK. The project runs from August 2012 to September 2015 under CELTIC-NEXT, the EUREKA Cluster for a Smart Connected World, and is partly publicly funded by the research ministries/ agencies BMBF (Germany), DGCIS (France), and TEKES (Finland).