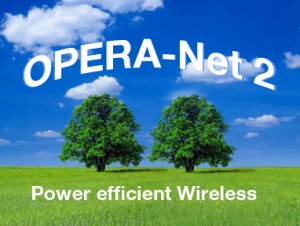 e. Celtic-Plus project Opera-Net 2 has developed new powering solutions for wireless networks. Projects results will help to avoid the foreseeable collapse when power consumption would scale with the expected increase of bandwidth in mobile communications in the coming ten years. The project adopted a holistic approach combining innovative powering solutions starting from network architecture, including radio signal coding schemas, down to the component level of the RF amplifier.

It is well known that the traffic in wireless communications will continue to increase at high pace. This means denser networks and higher processing rates that will, for sure, induce more energy consumption and as a consequence increase the operating expenses (OPEX) of networks. The energy efficiency of electronics is improved by a factor of two every 18 months according to Koomay’s and Moore’s laws. However, the efficiency of telecommunication hardware is still progressing by 2-5% per year only, which is by far insufficient to cope with this tremendous increase of data traffic. Less energy hungry technologies for wireless communications is therefore not only enabling future of mobile communications but it is a must for sustainable development of our society in a climate neutral way as this is proposed by the objectives of COP21[1].

The project combined network optimization methods such as Smart Frame Filling with hardware optimizations based on an Envelope Tracking power amplifier. Envelope tracking is a high-speed technique that dynamically adjusts the power amplifier energy consumption to the traffic level. Smart Frame Filling is a scheduling technique compliant with the 3GPP standard that dynamically creates silent time frames during low traffic periods in which the base station does not transmit any data. The ability of the amplifiers to be switched off during these silent periods enables a power consumption reduction. When combining those optimization methods and during low traffic conditions, energy savings could reach about 50% at radio module level.

Jean Claude Bourgoint Vice-President from Orange states: “It can easily be understood that when applying these technology to millions of base stations in the world, there will be a huge positive impact in term of energy savings and CO2 emissions associated to a significant reduction of the operational cost of radio Networks.”

The Opera-Net 2 project ran from December 2011 to May 2015. The consortium, led by Orange, France, included 11 organisations from 4 countries:

For further information, see the project website at: http://projects.celticplus.eu/opera-net2/.

[1] From November 30 to December 11, the United Nations Climate Change Conference, COP21 will be held in Paris. The objective of this conference is to achieve a legally binding and universal agreement for the climate, for all the nations of the world.