On 5th February 2019, CELTIC-NEXT, Innovate UK and the UK’s Knowledge Transfer Network, KTN, jointly organised a Proposers Day at the Institute of Contemporary Arts in London. Following the decision of Innovate UK in late 2018 to fund CELTIC projects, the goal of the event was to stimulate the UK community to participate in CELTIC projects. Very important for achieving this goal is that the UK ICT community builds relationships with the existing CELTIC communities in other EU countries. The Proposers Day gave some new insights on recent technological developments, provided information on funding opportunities and presented 13 new project ideas. 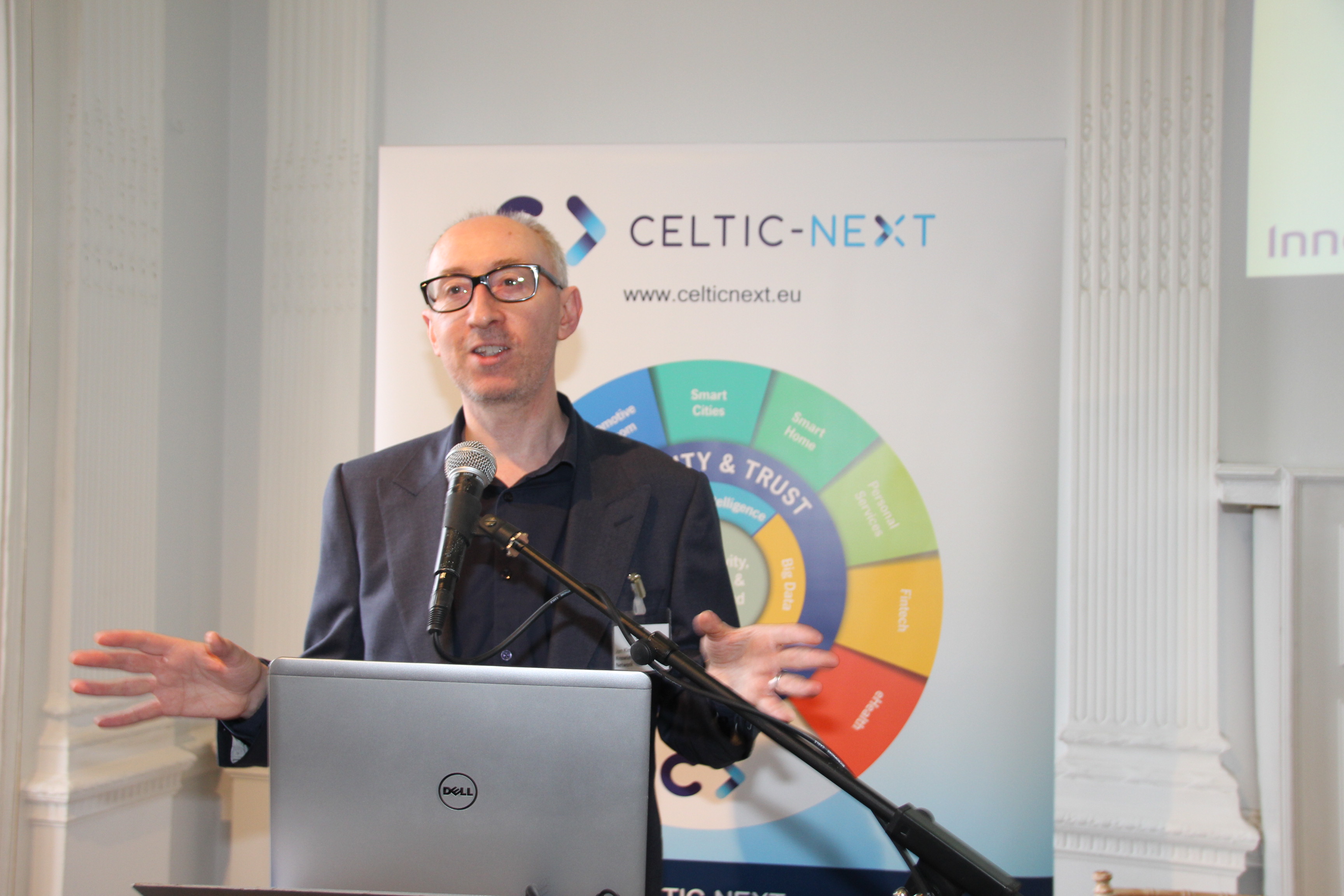 The Proposers Day was opened by Jon Kingsbury from KTN and Valerié Blavette, CELTIC Chair Person from Orange France. They welcomed the 70 participants and explained why Innovate UK’s decision to fund CELTIC projects is important for innovation in the UK and Europe. 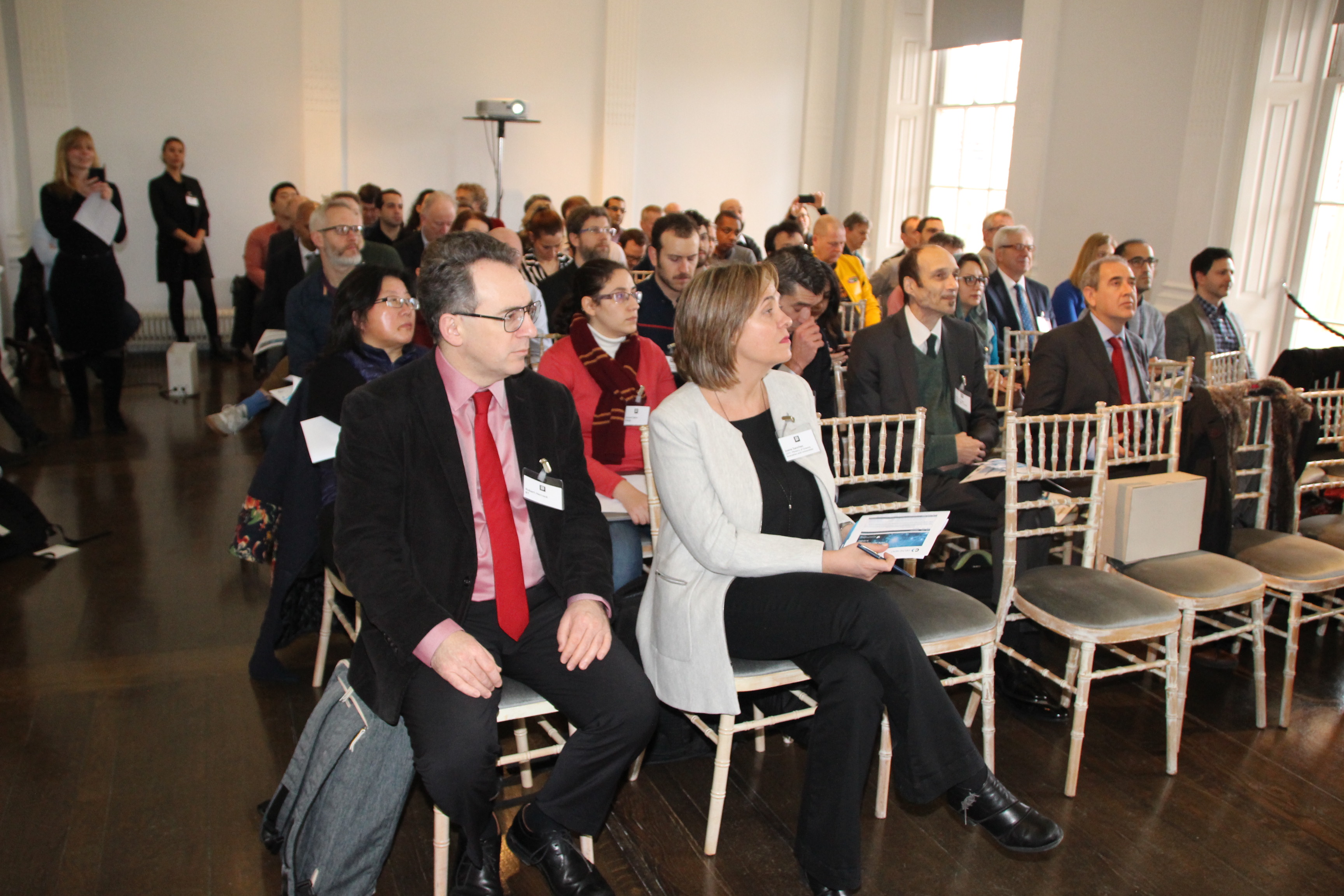 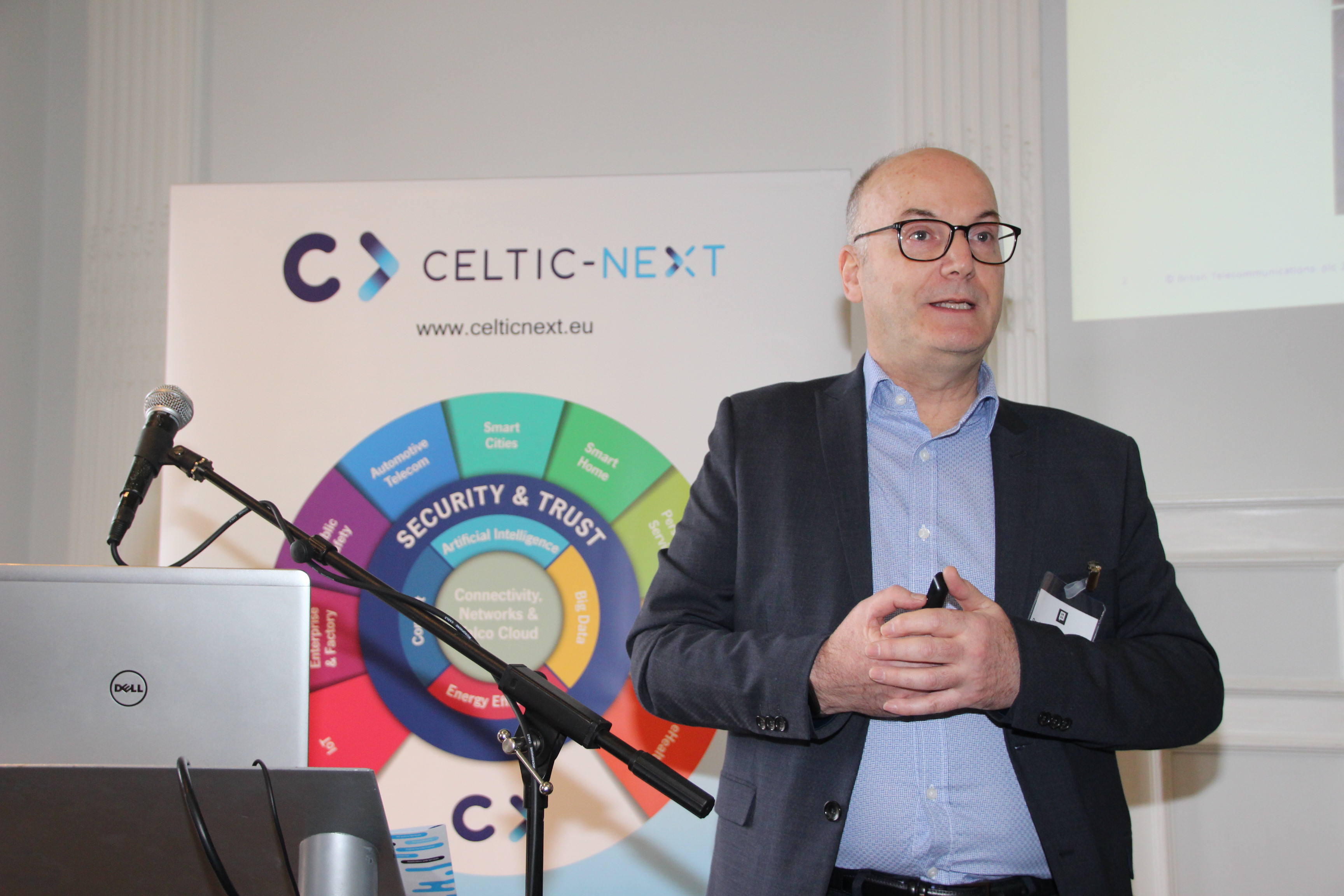 Paul Crane from BT presenting the Keynote “Beyond 5G”

Paul Crane, Converged Networks Research Director at BT, said that virtualization is a radical change to the way networks are built. He presented his vision on how future developments will change and boost the businesses of his company and the world of communication.

Jean-Francois Fava Verde from Innovate UK presented the first call for CELTIC projects in the UK – the CELTIC call for international proposals is open until 8th April 2019. It will be complemented by an Innovate UK Call for national applications. The priorities of this Innovate UK call are “Innovative 5G infrastructure technologies” and “Applications and services that leverage 5G networks, as well as 5G features in satellite networks or 5G applications and services integrating satellites”. On 2nd April 2019, Innovate UK will organize an additional briefing event on funding of CELTIC projects by Innovate UK.

Matthias Kuom from DLR explained the main focus of funding in Germany and how important it is to actively shape the digital revolution to maximise the benefits for our society. Today, the main researched topics in Germany are production systems (Industry 4.0), energy systems for the future and social systems able to cope with demographic change. 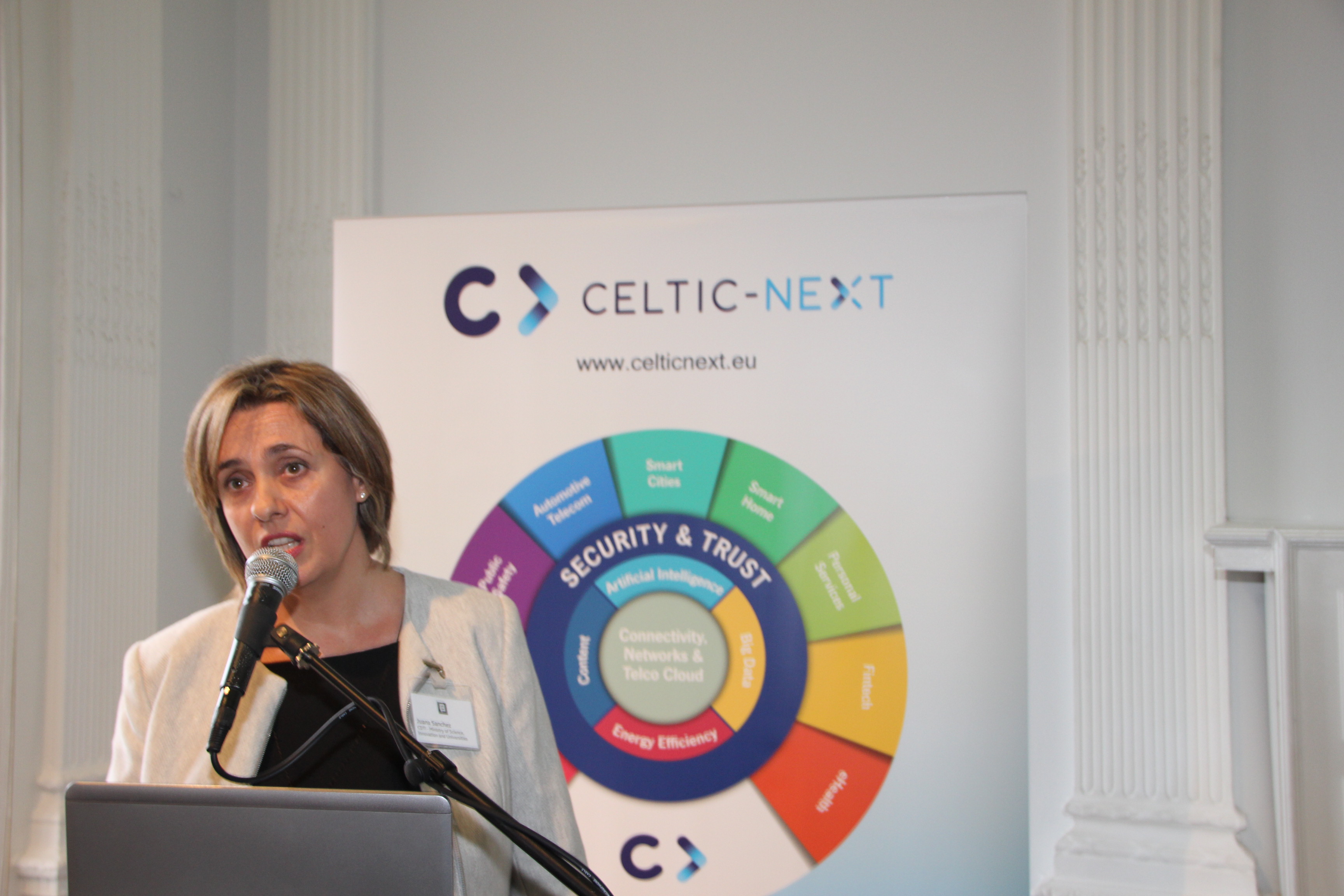 Juana Sanchez from CDTI presented the Spanish involvement in CELTIC projects. Spanish companies are among the most active in CELTIC. There is no other country that had more participation in CELTIC projects than Spain. She also explained how the application process for public funding via the open CDTI call works in Spain. 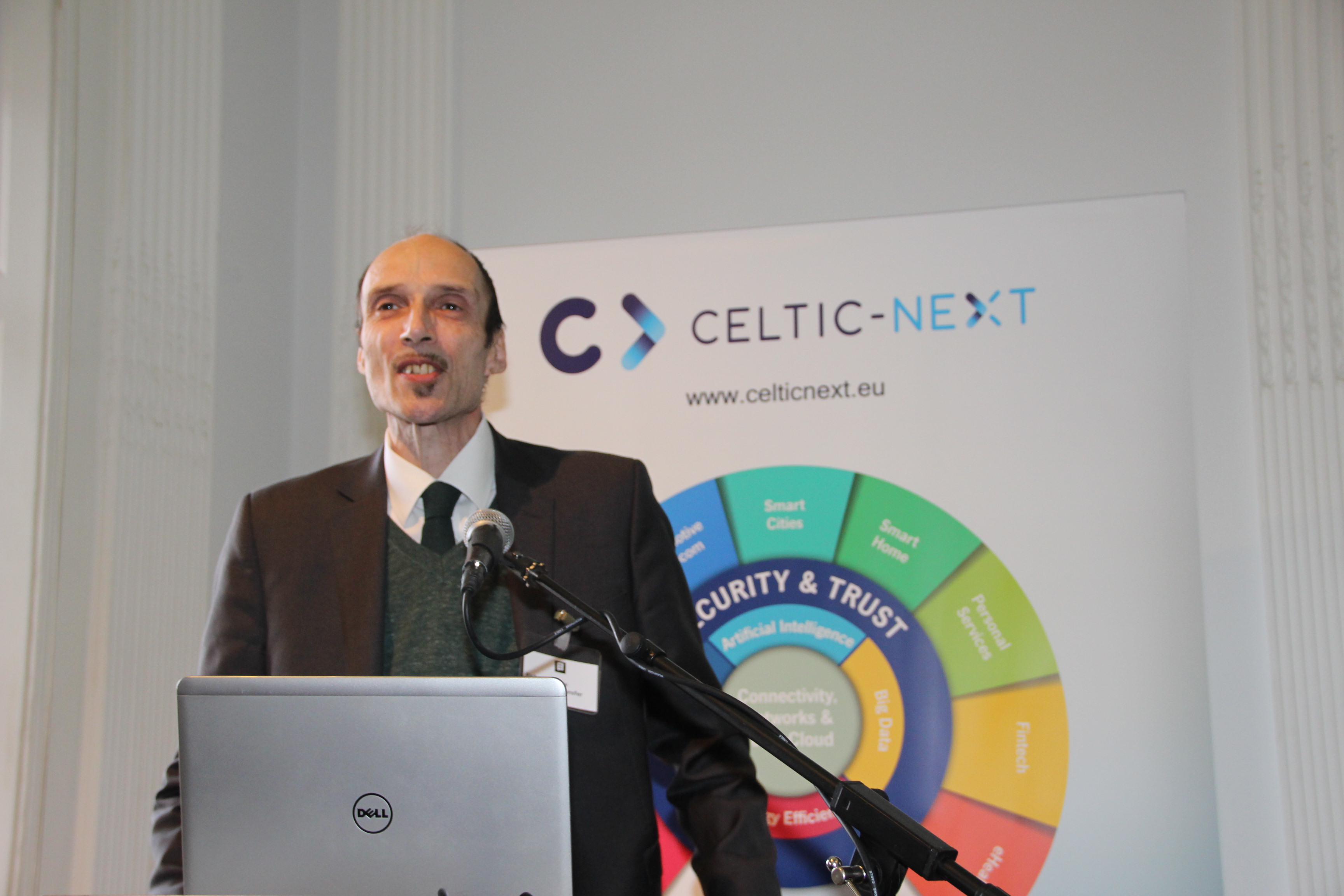 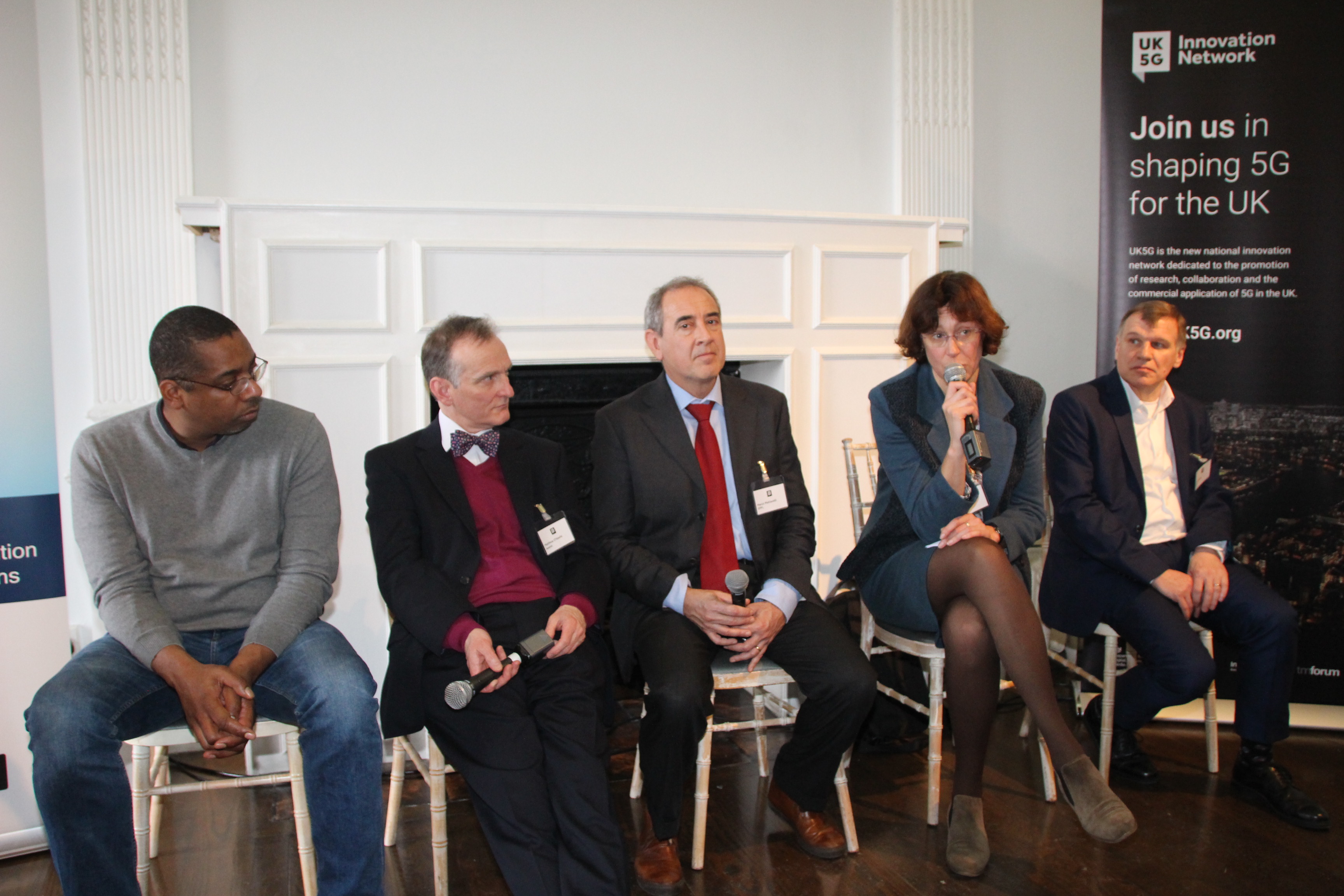 The first panellist, Ian Cooper from BT, presented the results of the CELTIC projects 4GBB, HFCC/G.fast and GOLD all developing the G.fast technology that allows G-bit bandwidths over copper. The technology is currently rolled out by BT. Ian highlighted the commercial and technological advantages of this technology that avoids opening roads and gardens (Digging becomes even more expensive when coming closer to the homes).

Valerie Blavette from Orange reported on the high impact of CELTIC projects. She illustrated this with two project examples – ODSI and SOOGREEN. The ODSI project resulted in 12 new or improved products and allowed to win tenders in Paris, Hong Kong and with the company Bayer. The second project, SOGREEN, tackles the energy consumption of communication networks. The project helps to keep power consumption at an acceptable level, while the traffic doubles every two years.

Steve Clements from the UK start-up company aXenic reported how the 80 million euro CELTIC flagship project SASER led to 55 new or improved products and 3 start-ups as well as a new business outside the initial scope of the project. After quite some struggle the project partners were able to develop a new type of modulators, an electronic device that modulates the information on the light beam of the optical fiber. The novel modulator provides higher bandwidth with only half of the volume. It is therefore much lighter and ideal for satellite applications; aXenic took up this challenge successfully. Today, it sells this new type of modulators for space applications.

Steny Solitude from the French start-up Perfect Memory explained how the CELTIC Project MediaMap+ initiated a new paradigm in Digital Asset Management (DAM), which is using semantic techniques. It allows translating factual knowledge into formal knowledge that can be injected in data mining and machine learning systems. Today the technology is used in audio visual productions. Partners are ATOS, Cap Gemini and BPI. They serve clients in the audio-visual domain such as RTL-TVI Belgium, Radio France and RTBF. In its ten years of existence, Perfect Memory has established the technology and has grown to 15 employees.

Marco Mattavelli from EPFL, the Federal University of Lausanne, presented how the CELTIC project 4KREPROSIS integrated technologies for 4K TV content production. The system integrates 4K UHD wireless camera heads and recording units for remote production. It further integrates an advertisement insertion system and it is able to selectively protect contents. The full system was used for audio-visual production at the FIFA World Cup 2018 in Moscow where the system successfully covered the whole event. Today there are 10 new products on the market, which are based on 4KREPROSIS technology.

CELTIC-NEXT News and How to Submit a Project Proposal

Peter Herrmann from the CELTIC Office presented the newly labelled CELTIC-NEXT EUREKA Cluster and explained how to submit a CELTIC proposal.

Another core element of the Proposers Day was the pitching of project ideas. 13 proposers presented their ideas on a wide range of ICT topics. They included future 5G vertical aspects, Industry 4.0, agritech, autonomous intelligent systems, verification as well as proof of 5G enabling IoT topics and other cutting edge 5G-related technologies such as Artificial Intelligence and Edge Computing. The presentations led to productive discussions with the audience. The Pitch Presenters and the Moderator of the session Christiane Reinsch announced the CELTIC Consortium Building Web-sessions to the audience and invited interested listeners of the different proposal pitches to the follow-up Web-sessions to find out about possibilities to join the different consortia of the pitch presenters. The CELTIC Consortium Building Web-sessions took place in the 3rd week of February.

After the pitch presentations, the participants discussed the presented project ideas. The matchmaking part of the event was highly appreciated by the audience and a number of follow-up conference calls for further discussing project ideas have been scheduled.

All presentations and project pitches are available at