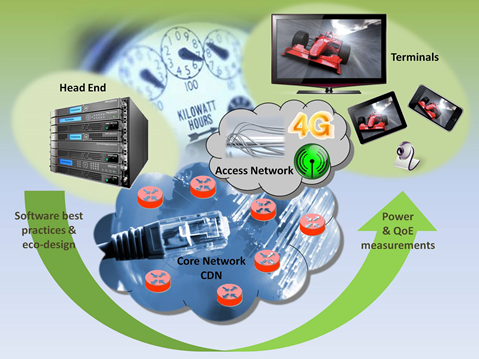 The project partners’ efforts concentrated on architectures, hardware and software design, protocols and basic technologies in the devices. In parallel to these activities, the project ran transversal activities on “Software best practices & eco-design” and “Power & QoE measurements”. The project also considered the use of new technologies in the form of Software Defined Networking (SDN) associated with Network Function Virtualization (NFV).

Several solutions were studied to reduce the energy consumption in networks. The most promising are the following. A gain of 10%-15% can be achieved by using an all-optical core network. Using DOCSIS3.1 appliances for cable network nodes and amplifiers provides up to 45% improvement. Energy-efficient routing algorithms for SDN-based access networks can save up to 10%, and load balancing algorithm in SDN-based data-centre networks up to 40%. A multi-tier architecture brings up to 93% savings in video surveillance networks. Video playback power consumption can be reduced by 83% with an optimized execution environment in terminals. The highest savings in TV displays (up to 45%) are provided by including new optical film structure, LED efficacy improvements and auto-dimming algorithms.

Partners have published 52 scientific papers out of their activities in the project. The papers were published in high-ranked international conferences, journals and workshops. Another important publication result of CONVINcE is a book that will be published by Springer International Publishing AG – title: “Guide to Greening of Video Distribution Networks – Energy-Efficient Internet Video Delivery”. In eleven book chapters, project partners report on the results achieved.

The consortium, led by Harmonic France, included 16 partners from 5 countries:

For further information, see the project website at: http://convince.wp.tem-tsp.eu/