ICT project highlights at the Celtic-Plus Event in Stockholm

The Celtic-Plus Event in Stockholm on 28 – 29 April 2016 featured a number of ICT project highlights, which provided a glimpse of the future in information and communications technology. In addition to presenting results of past and ongoing projects, the major annual event of EUREKA Cluster Celtic-Plus offered ample matchmaking opportunities for developing new project ideas and partnerships in the area of ICT. The Celtic-Plus Event was held in conjunction with this year’s EUREKA Innovation Week that was held under the Swedish EUREKA chairmanship and which attracted more than 900 participants and 50 exhibitors from 33 countries.

The participants of the event had the opportunity to get first-hand insights on a number of successful Celtic-Plus projects, including some which had finished a few years ago and which had already achieved significant business impact.

One of them is the HFCC/G.fast project that developed the new Gigabit broadband access technology “G.fast”. For its high level of innovation and business impact, HFCC/G.fast won the prestigious EUREKA award in the category “Competitiveness”. The Gigabit technology developed by HFCC/G.fast is the next step for bringing optical fibre closer to homes. It will soon be deployed by major European telecom operators. In the UK alone BT will roll out the technology to about 10 million customers.

Two further Celtic-Plus projects demonstrated a high level of innovation and business impact as well:  The HIPERMED project had developed an eHealth platform for remote medical consultation that can virtually save lives. The platform is currently available in France, Poland, Spain, and Turkey. The other project, IPNQSIS, had developed a solution that allows monitoring and managing service quality of IPTV, Mobile TV, VoIP and videoconferencing for a better customer experience. The IPNQSIS is commercially used in France and will soon be available in other countries. Both HIPERMED and IPNQSIS won the Celtic-Plus Innovation Award. 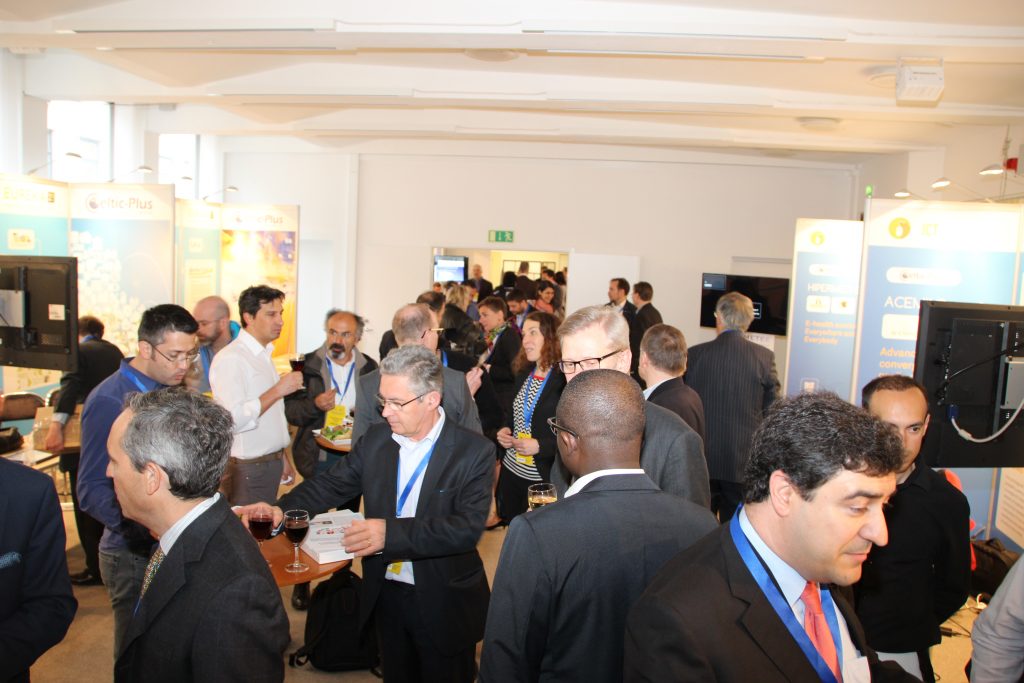 Three other Celtic Projects that finished in the course of 2015 received the Celtic-Plus Excellence Award: SASER in the category “Network Technologies”, QuEEN in “Services and Applications”, and TILAS in the “Smart Cities” category. These and other projects were shown in the exhibition, where altogether 15 Celtic-Plus projects were presenting their results that attracted huge interest by participants.

The second day of the Celtic-Plus Event was dedicated to new project ideas and allowed the participants to network with public authorities and with peers interested in building new consortia. In the project pitch session not only participants from Europe, but for the first time also participants from Canada and Korea presented their project ideas. In total 25 project ideas were presented showing an upward trend in the generation of transnational collaborative projects in telecommunication technologies. A large number of transnational research projects are expected to be launched as a result of the many personal encounters at the event.

Further information on the Celtic-Plus Event 2016 is available at https://www.celticnext.eu/event/celtic-plus-event-2016/

Celtic-Plus is the EUREKA Cluster for telecommunication networks and services and also focuses on new media, future Internet and applications and services. Celtic-Plus is a strategic initiative that was launched by major European ICT companies, such as Alcatel, Ericsson, Nokia, Orange and Siemens , and which has been mandated by the national public authorities that are part of EUREKA. For SMEs, Celtic-Plus offers an excellent opportunity for collaborating with major players in in the area of ICT and particularly telecoms.

The deadline for the next Celtic-Plus project call is 25 May 2016. Further information about the call is available at https://www.celticnext.eu/call-information/