By techsupp
Posted June 25, 2015
In CELTIC-NEXT News
Interview with the team leader of the record breaking SASER field trial2015-06-252015-06-25https://www.celticnext.eu/wp-content/uploads/2018/08/logo-celtic-next-horizontal-positif-color-800px-1.jpgCELTIC-NEXThttps://www.celticnext.eu/wp-content/uploads/2015/06/SASER-figure0-interview.png200px200px

The multi-terabit field trial took place over the existing operational Orange fibre infrastructure between Lyon and Marseille. Please read the interview with the team leader of this ground-breaking achievement, Erwan Pincemin from Orange.

Question: What did it mean to you and your team to receive support from Celtic-Plus and in turn from the national authorities of Germany, France and Finland (BMBF, DGE and TEKES)?
Answer: Without this support, innovation would be considerably slowed-down in Europe, and European industrial companies in the telecommunication sector could not compete any more with their US and Chinese competitors.

Question: What does this new world-record transmission in terms of capacity and reach means for average citizens?
Answer: This world-record transmission capacity concerns long-distance optical transport networks, where aggregation of all traffic (fixed and mobile) is performed. Without that, end-users could not use their 4G and soon 5G smartphones, could not download HD video on their internet box and having 1 Gbps at home would not become reality for our customers.

Explanation on the technological building blocks
This record breaking field trial of 38.4 Tbps was obtained over the Orange legacy fibre infrastructure between Lyon and Marseille.
The 16QAM/32QAM/64QAM transceivers: (provided by Coriant) have been designed and built to reach ultra-high spectral efficiencies (up to 8 bit/s/Hz achieved with 64QAM) permitting to pack 38 Tbps in 35-nm bandwidth (C-band), while propagating over 762 km of legacy fibre infrastructure.

The figure shows an example of a 32QAM WDM channel before and after transmission over 762 km; (The transmission capacity of the link is proportional to the number of dots.)

The hybrid Raman/Erbium-doped optical amplifier: (provided by Ekinops and Keopsys) have been developed to be low-cost and energy-efficient. 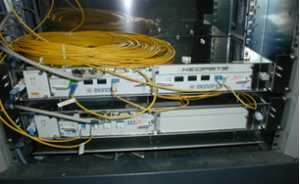 The figure shows the hybrid Raman and Erbium-doped-fibre optical amplifier. Both allow amplifying the optical signal in the fibre without the need for electrical amplification of the signal.