21 August 2015, Heidelberg, Germany. Driving will become safer thanks to talking vehicles and novel communication infrastructure solutions for roads. Celtic-Plus project CoMoSeF made an important step towards providing ready-to-market traffic information solutions for current and future mobile ecosystems in the intelligent transportation systems (ITS) market. The consortium developed new solutions able to disseminate traffic-related information between cars, the road infrastructure, transport agencies and others to warn drivers of upcoming hazards and keeping the traffic flow smoother. 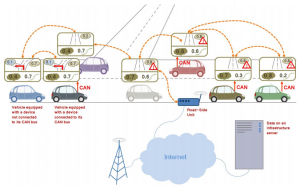 The driver is now able, for example in foggy weather situations, to have a clear view of the street and get warned of pedestrians crossing the road ahead via his mobile device. Traffic authorities are now able to exchange their traffic information directly with the road participants, and vice versa. Taxi fleets in Finland use the CoMoSeF equipment, for example, to distribute their information about traffic jams for cost-reduced trip planning to the next client. Buses from Otokar in Turkey are equipped with mobile devices updating the driver with speed recommendations and general traffic information. A pilot use case in Luxemburg focused on the car sharing market and traffic management in cooperation with a local radio station to exchange data on traffic jams.

CoMoSeF’s modular architecture used a mixture of existing communication standards as 3G 4G LTE and 802.11g to communicate between cars and between cars and the infrastructure. CoMoSeF’s ITS solution focused on back-end applications for mobile devices, in-car after market devices, enhanced road-side units, and solutions for servers orchestrating road traffic information.

Pilots
CoMoSeF conducted a number of large-scale pilots in Europe, including France, Spain, Romania, Finland, Luxemburg and Turkey, as well as in Korea. The project enlarged their use cases also with an external pilot during the Winter Olympics in Sochi, Russia, in 2014. The Olympic skiing team provided real end-user feedback for the CoMoSeF based icy road prediction service and evaluated the services as very good and useful.

One of the major challenges of the car-to-car communication for many years has been that a critical mass of communication infrastructure needs to be reached to avoid accidents in critical situations. COMOSEF’s solution showed that the combination of centralized and decentralized communication technologies is a good approach to enable traffic information distribution for safer and smoother trip planning already today.

The project was coordinated by Finnish software provider Mobisoft. It started in July 2012 and completed its work in June 2015. Further information is available on the Celtic-Plus website at:  www.celticnext.eu/project-comosef/

The CoMoSeF project started in July 2012 and completed its work in June 2015.
The consortium, led by Mobisoft Oy, Finland, included 19 organisations and 2 universities from 6 countries:

For further information, see the project website at: www.celticnext.eu/project-comosef/